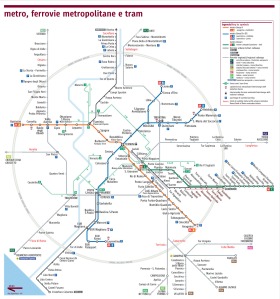 Having traveled a number of times between Rome, the airport, the cruise port of Civitavecchia and other cities in Italy we have made a few mistakes but have also had some fun traveling like a native. Here is some basic information on travel centered on Rome as well as some tips on things to watch out for.

Buses between Fiumicino (FCO) airport and Rome
First we have discovered that buying bus tickets online before your trip is a bad idea. Before our first trip we had looked into buying bus tickets online and had made notes on lines and costs but didn’t actually purchase. Our hotel was just a few blocks from the Termini (the Central Train Station) so we decided to find an express bus.

Once we arrived, we discovered that there were a number of bus ticket counters near the baggage area and pricing was lower than what we had seen online. We bought tickets on an express to Termini for about €8 each. At Fiumicino airport, the bus departure points are outside of Terminal 3, to your right. Buses take about 45 minutes to get to Rome Termini station from Fiumicino airport, traffic permitting, and we were at our hotel 15 minutes after arriving at the Termini.
If you are looking to go from Rome to the airport, the locations are less centralized and we would suggest inquiring at your hotel. Some buses can pick you up there and the front desk can offer advice on traffic time issues.
There is also the Roma Airport Bus T.A.M. for €5 per person (Nov 2016). These buses run between 08:00 am and 11:30 pm between Fiumicino (Terminal 3) and Termini Station. The return tickets cost €8.00 per person and run from Termini Station between 4:30 am and 8:30 pm.

Trains (Commuter, Express and Regional)
First, a word of caution. From Fiumicino airport there are a number of options for taking a train into central Rome but be careful of using the Suburban trains during rush hour if you are carrying luggage. (Unfortunately if you are flying in from the U.S. you are usually arriving early in the morning and that means rush hour.) Seating is at a premium on these trains and the aisles are standing room only. The locals do not take kindly to you taking up seats with your bags or blocking aisles and they won’t hesitate telling you about it.
Suburban train fairs run €8 per person to Termini. This service (FL1) has a number of stops including Trastevere, Ostiense, and Tiburtina stations. This is usually the best train to take if you’re going to Trastevere, Piazza Navona, or the Pantheon area. The trains start at about 6:00 am and run till after 10:00 pm. The trains run 10 to 25 minutes apart depending on the time of day. At Ostiense station, this service connects with metro line B to Termini, and also with high-speed Italo trains to Florence and points north. At Tiburtina station, the FL1 connects with Metro line B and also to Italo and Trenitalia trains. At Trastevere station, you can connect to FL5 for service to Civitavecchia. You can also catch trains to Florence at Tiburtina station as well as Civitavecchia.
The Leonardo Express train (€14 per person) is a fast service between Fiumicino and Rome Termini. Trains leave every half hour and take 32 min. It is the most popular service to central Rome but can be busy.
Rome Termini is the central station in the city with access to the metro and bus routes to other areas and train service to other parts of Italy. In the main terminal hall there are information/ticketing counters but be careful and don’t just walk up to them. You need to get a ticket and watch the board for your number to be called and to identify the window to use. Also, while most situations in Rome and Italy allow you to get by very well speaking only English, train ticket offices are often an exception. Be prepared with written information about where you’re going.
Note that tickets for many trains are not for reserved seats. You can use them at any time within the next several months, but the ticket MUST be validated right before use. Before boarding the train, punch the ticket in one of the little green and white machines around the platform area.

Taxi
The fare for a taxi from Fiumicino to central Rome for one to four people and luggage is €48. The trip takes approximately 45 minutes to most parts of this central area. If your hotel is outside this area, you will have to pay the meter. Note that the fixed price from the airport to central Rome applies only to taxis licensed by the City of Rome. For a group of four, taxis are an economical option over buses and trains.

Other Options
In addition to buses and trains there are limousine services and, at last check, Uber is operating in the Rome area as well. An online search will probably provide additional information.