Brunei is beautiful and modern. This is a small country (Sultanate) located on the north coast of Borneo and fueled by energy – oil (black gold) and natural gas. Bandar Seri Begawan, is the capital of the Sultanate of Brunei. It is also the location of the Omar Ali Saifuddien Mosque. The mosque is considered one of the most beautiful in the Asia-Pacific region. It is a place of worship, a major historical site and the most famous tourist attraction of the country.

A conversation overheard on a bus in Brunei:

What makes this thinking possible is an average per capita income of over US$40,000. The government makes sizable amounts of money from oil, which it solely controls, along with large investments from that oil money worldwide.

The Sultan does take care of his people. At one time a part of housing in Bandar Seri Begawan was in ramshackle water villages. But those picturesque houses on stilts standing out over the water had major problems. Sanitation was a serious issue so the Sultan has been replacing them with new water villages with modern sewage treatment and solid supports. He has also been providing virtually everyone in Brunei with a free education, health care and a guaranteed job. Also attractive free public housing is popping up all around the country. 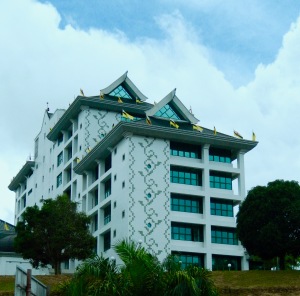 Walking around in Bandar Seri Begawan is a pleasure. It is very safe. The city has a lot to see and the people are friendly. Although Standard Malay is the official language, English is widely spoken and understood.

There is a modern open-air market where a large gang of monkeys hang out looking for treats. There is a garden called the Eco-Corridor and, of course, the Grand Mosque. There are also boat trips out to the water village, Kampon Ayer. The city architecture is modern and boasts a large shopping mall. Interestingly, the mall is the first place where we ran into a store dedicated completely to Lego figures – you can find the likes of Darth Vader standing next to Homer and Marge Simpson and others. 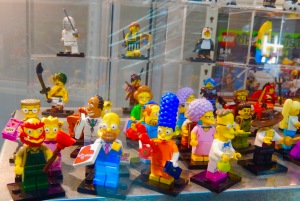 One thought on “A Day In Brunei”