Ravenna in the northern Italian province of Emilia Romagna is a bit off the usual tourist trail. Located only two and a half hours from Venice by train with frequent service starting at €12 it is well worth a side trip. This city is a treasure trove of art and history with its basilica containing an extensive collection of mosaics. The city was the capital of the Western Roman Empire from 402 AD until its collapse in 476. Today, Ravenna is home to eight world heritage sites, is known for its great food and is located on good beaches on the Adriatic coast that include world class resorts.

The author of The Divine Comedy who was exiled from his native Florence to Ravenna in 1318, where he completed Paradise, the final section of his famous three part work. Dante is buried in the graveyard beside the San Francesco Basilica.

The “Basilica of San Vitale” church in Ravenna, is one of the most important examples of early Christian Byzantine art and architecture in Europe. 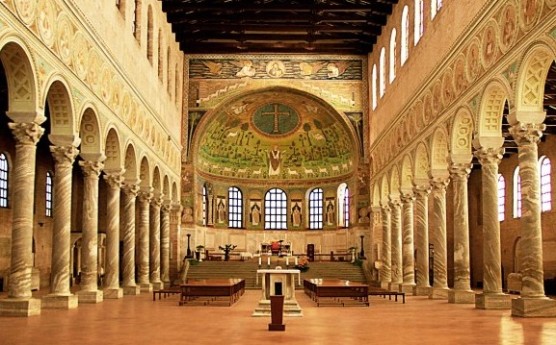 The Roman Catholic Church has designated the building a “basilica”, the title bestowed on church buildings of exceptional historic and ecclesiastical importance, although it is not an architectural basilica form.

The church was begun by Bishop Ecclesius in 526, when Ravenna was under the rule of the Ostrogoths and completed by the 27th Bishop of Ravenna, Maximian, in 547.

The church has an octagonal plan. The building combines Roman elements: the dome, shape of doorways, and stepped towers; with Byzantine elements: polygonal apse, capitals, narrow bricks, and one of the earliest examples of the flying buttress. The church is most famous

for its collection of Byzantine mosaics, the largest and best preserved outside of Constantinople. The church is of extreme importance in Byzantine art, as it is the only major church from the period of the Emperor Justinian I to survive virtually intact to the present day. Furthermore, it is thought to reflect the design of the Byzantine Imperial Palace Audience Chamber, of which nothing at all survives. The Church also inspired the design of the church of the Saints Sergius and Bacchus in Constantinople, and also was the model used by the Emperor Charlemagne for his Palatine Chapel in Aachen in 805, and centuries later theSan Vitale dome was the inspiration for Filippo Brunelleschi in the design for the dome of the Duomo of Florence.

Besides the history and good food the city is also a very easy place for walking with a number of wide pedestrian malls lined with good shops. 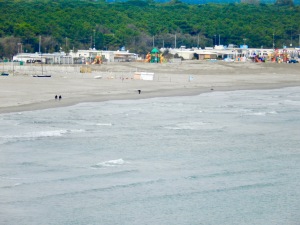 Outside the city towards the Adriatic beaches we passed a number of canals dotted with interesting fishing huts with huge and elaborate fishing net contraptions that didn’t seem a very sporting way of fishing. Even at the beach there was a long pier also with a number of these fishing huts and nets. I’ve never found a description or explanation of how these places worked?

Minerva’s Pencil Case has a great  post HERE with some breathtaking interior photography.

2 thoughts on “Surprise Gem of the Italian Adriatic Coast”