Temple Bar in Dublin is famous. Many people mistakenly think it actually is a bar but it’s not. In the seventeenth century a famous Dubliner, Sir William Temple  was the provost of Trinity College. Sir Temple owned property along the river. In the river in front of his land was a sand bar and around that time a breakwater was built at the mouth of the river. That resulted in the sand bar growing and as it filled it became part of the real estate of the city. Locals began to refer to this land as “Temple Bar” and the districts name survives today. 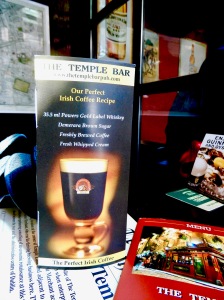 has a number of pubs and bars. In 1840 an establishment opened named Temple Bar Pub and today it is still a popular institution. It features good food, libations and live music. Every new visitor to Dublin should put a stop at the Temple Bar Pub on their list of destinations. From early in the day to late at night it is full of energy, serves good, moderately priced fair and features live Irish music.

Dublin has a reputation for good food and we lean strongly toward pub fare. Corned beef sandwiches, fish n’ chips, Oysters & Guinness, Irish stew to name a few. During our recent visit we took advantage of a few and were pleased with them all.

The Bank Bar and Restaurant opened in 2003 and located on College Green next door to H&M in the heart of Dublin. The name comes from the building originally being a bank and it still has its original character with lots of brass railings, tiles, and ornate ceilings. It offers primarily a pub menu and features a live piano player. We give it high marks.

Murrays Pub located on O’Connell Street just north of the Spire. This pub 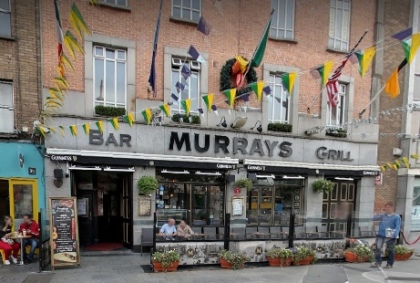 has a good reputation for food and features live music and Irish dancers in the evening. It had a welcoming comfortable feeling and a good Irish Coffee which was just the thing on a wet afternoon.

Grand Central Café Bar is also on O’Connell Street just south of the Spire. Located in a historic building that was shelled during “The Rising”, it offers a large collection of local beers and cocktails and an extensive menu of dishes, prepared in front of you in an open plan kitchen. It features music and dancing in the evening. Good food and service at reasonable prices.

Directly across the street from the Ha’penny Bridge on the south side is The Merchant’s Arch Bar which features live music and good bar snacks. We stopped in around happy hour time and joined in on a few Irish songs and a pint of Guinness. The atmosphere was lively and the staff was friendly and efficient.

For dessert and coffee look up The Wooden Whisk at 94 Talbot Street just a few blocks east of the Spire on O’Connell Street. It has a small deli and coffee shop vibe but after a few days of trying pastries and coffee around the city this was real find and the prices were more than fair. 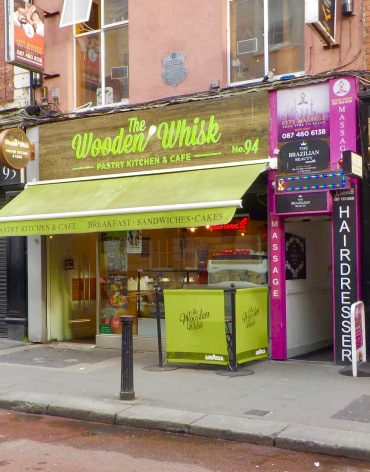 And than there’s Starbucks. We have traveled the world in recent years and there is an American creation that has become as ubiquitous as McDonalds – Starbucks! From Australia to Thailand to Dublin you will probably walk past several Starbucks in a day. While we prefer local we also carry our Starbucks card with us when we travel, often because we know we can access free wifi. We’ve been told we can pay with funds on our card at any Starbucks worldwide but for some reason we have been skeptical. In Dublin we broke down (I needed to reload a Google map) and were surprised at the transaction. First it was instant. Second the receipt spelled out the transaction in Euros as well as the dollars used and the exchange rate was exactly what the mornings quote showed. Lastly it also showed the balance on the card in Euros as well as dollars.. Two big thumbs up for Starbucks.