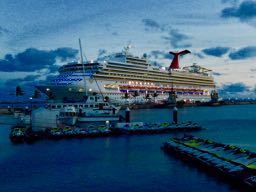 United Kingdom. They are the parts of the British Empire that have not been granted independence or have voted to remain British territories. Bermuda is located in the western Atlantic due east of Hilton Head South Carolina. Even though it is at a northern latitude it is a tropical island being washed by the warm currents of the Gulf Stream. The islands boast a lush landscape that includes a large number of cedars and palm trees. Famous for its beautiful beaches (one pink) it has long been a favorite destination for the wealthy from around the world that probably helps support a reasonably high standard of living for Bermuda.

The northwest tip of the islands is home to British fortifications that date back to the 17th century and included the dockyards including Kings Wharf which is now home to the cruise piers. The British fortifications were greatly expanded during the American Civil War over fears of attack by the Americans and now house the Bermuda Historical Museum, a dolphin encounter, a glass blowing operation, a nice beach with snorkeling areas and a number of shops and restaurants. The dockyards are also the center of the areas water sport concessions and excursion boats.

transportation. You can buy a one or two day pass that provides unlimited use of the ferries and buses starting at B$18. Bermuda is actually a set of islands very close together and arranged in the shape of a fish hook. The cruise port is located in the west near the tip of the hook. The town of St. George is near the hook’s eye to the northeast and the capital of Hamilton is near the inside bend of the hook. Most large beaches are on the coast across the island from Hamilton. The islands have about fifty miles of roads serviced by a very good bus system along with regular ferry service between those three major locations. There are also scooters and cars that can be rented but this is not recommended because of the narrow roads and the English left hand driving system. 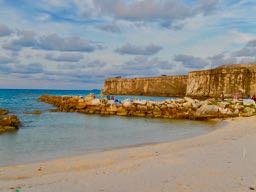 The local currency is the Bermuda Dollar and is kept on par with the US Dollar. American currency is readily accepted as well as most major credit cards.

There is a lot to see and do right in the Kings Wharf area but don’t miss visiting Hamilton. There is a large fortification high above Hamilton with sweeping views of the city and beyond. Hamilton is also home to a number of historic buildings and some beautiful architecture. Good restaurants and great shopping are also a feature of Hamilton and a trip out to St. George is highly recommended. Almost everywhere you go in Bermuda boasts great scenery including pocket beaches, attractive seaside villages and historic landmarks.

Horseshoe Bay is perhaps the most famous beach in Bermuda. It has been rated the #8 beach in the world. A popular tourist spot, it lies on the main island’s south coast, in the parish of Southampton.

The Bermuda Aquarium, Museum and Zoo is a facility located in Flatts Village, Bermuda. It was established in 1926 by the Bermuda government.

Crystal Cave is a cavern located in Hamilton Parish, close to Castle Harbour. The caverns are approximately 1,500 feet long, and 186 feet deep. The lower 60 feet of the cave are below water level.

Gibbs Hill Lighthouse. Built in 1844 by the Royal Engineers, is the taller of two lighthouses on Bermuda, and one of the first lighthouses in the world to be made of cast-iron.

Bermuda Institute of Marine Science http://www.bios.edu/#!/who-we-are is a non-profit institute located in Hamilton and features a number of exhibits and programs.

Fort Hamilton Bermuda. Located in Hamilton City, Fort Hamilton is a picturesque site with lush gardens overlooking the harbor. It was built in the mid 1800s to protect the Hamilton Harbor and form a defense from American forces during their civil war.

Somerset Bridge. Advertised as the worlds smallest draw bridge (see our story about the bridge HERE). If you pay attention while taking the bus from Kings Wharf to Hamilton you will drive right across the bridge.

St. George. This is a picturesque town located at the far end of the islands from Kings Wharf serviced by bus or ferry.