Nha Trang is a major Vietnamese resort area famous for beautiful beaches and a growing entertainment venue. It is Vietnam’s most popular coastal town that has benefitted from its proximity to a number of beautiful beaches. Directly across the water from downtown is Tre Island that boasts an amusement park and some additional nice beaches. The area’s beaches attract people from all over the world and seems particularly popular with Russian tourists.

Nha Trang is a tender port with a landing location south of the city at the port area. The pier does have public facilities nearby and when ships are visiting a market is set-up in the port selling t-shirts, crafts and souvenirs. Hint – when buying t-shirts it’s a good idea to buy a couple of sizes larger than your used to.

In the city of Nha Trang there is one of the worlds largest cablecar systems connecting to Tre island across three miles of water to Vinpearl Amusement Park. The most convenient way to get around is by taxi where most drivers speak English. The trip from the port into the tourist center of town is about five miles and should cost about five US Dollars. The city of Nha Trang is a good walking town as a number tourist attractions, popular restaurants, bars and nightclubs, and shopping are within walking distances in the center of town.

If you’re more adventures Nha Trang also has a bus system with six routes. This is another good way to get around with fares being no more than 5000 Dong. The buses are air-conditioned and comfortable. Through the tourist area of Nha Trang are two popular routes, the No. 2 and No. 4 that cross near the center of town. 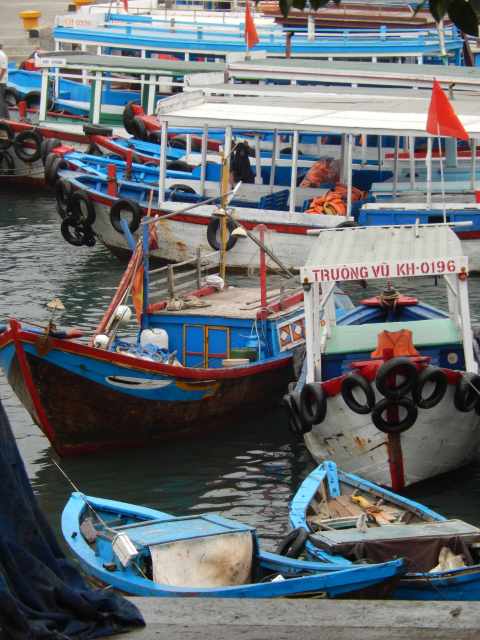 The local currency is the Vietnamese Dong that runs between 20,000 and 25,000 to 1 US$. Also the U.S. Dollar is welcome, actually almost preferred almost, everywhere at good exchange rates as are most major credit cards

The major attraction are the beaches. The largest resort beach area is along the coast ten miles south of the port toward the town of Biển Đông, but there are good beaches north of town and over on Tre Island.

Nha Trang also has a number of cultural sites including the Long Sơn Pagoda a Buddhist temple in the city. It is regarded as one of the main attractions in the city, along with the Hai Duc Temple. There is also Po Nagar, a Cham temple tower built sometime before 781 AD and located in the medieval principality of Kauthara, near Nha Trang. It is dedicated to Yan Po Nagar, the goddess of the country, who came to be identified with the Hindu goddess Bhagavati.

The area also has a number of highly rated skin diving and scuba sights. As an interesting note the waters around Nha Trang support a thriving seahorse collection industry much to the objection of the UN and wildlife protection groups.