We had been traveling through southern France for a week and intended to finish with a few days in Paris since that was where we would catch our flight home. When we planned this trip we hadn’t realized that July 14th was Bastille Day. When we learned this we weren’t sure how that day would go.

On the 14th we took a TGV high speed train from Lyon to Paris arriving at about 1:00 pm. Our new plan was to take advantage of the celebration. Figuring that the streets and Metro would be jammed and crowds at the Champ de Mars would be impenetrable, we decided to get a day pass on a Hop-On Hop-Off boat (Batoboat HERE). Later that evening we would take a boat from the Notre-Dame area right down to the Eiffel Tower stop, get off and watch the fireworks from the river. After that, since the boats stopped around 9:30, we would walk out of the area and, if lucky, catch a taxi or Metro back to our hotel.

That afternoon, as a tourist, Bastille Day seemed like any other day. We walked the streets, bought some souvenirs and had an early evening meal at a small bistro on the Left Bank. Around 8:30 we headed out for our boat ride to the Eiffel Tower. So far so good – until the boat skipped the three stops nearest the Eiffel Tower, they had been closed for the celebration. It seemed as if everyone in Paris was way ahead of us in their planning. The river was blocked to traffic anywhere near the tower, a number of bridges were blocked and many of the streets and sidewalks were impassable up to a half mile from the Champ de Mars. There was simply no way we could get close to the celebration at that time of night.

In hindsight I should have known better. I’m from Washington D.C. and going to the Mall for the the Independence Day shows on the 4th was an all day affair with the exit to home being usually a couple of hour trip. Why would I have thought Paris would be any different? Truth is I just hadn’t thought about it.

We hadn’t intended on being in Paris on Bastille day and our plan was a last minute attempt. A little discouraged we made our way back to our hotel and 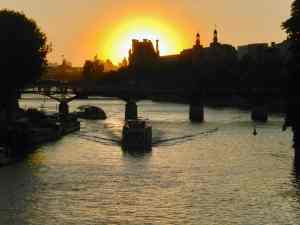 watched the event on television which might have been a good thing. It seemed the Sun didn’t set until way past 9:30 and the fireworks didn’t go off until around 11:00. On television the show was interesting and included two choirs, six or eight couples that seemed to be famous opera singers and the only music I recognized was a song from West Side Story(?). The finale was the national anthem sung by everybody and it seemed to go on for over a half hour. The anthem was followed by a light show on the Tower followed by the fireworks. All in all it seemed a very good evening for Parisians.