Ushuaia, Tierra del Fuego and The Primary Gateway to Antarctica

Ushuaia is often referred to as the end of the world and is the capital of Tierra del Fuego, Argentina. It is recognized as the southernmost city in the world. Ushuaia is located in a wide bay on the southern coast of Isla Grande de Tierra del Fuego, bounded on the north by the Martial mountain range, and on the south by the Beagle Channel. It is a popular port of departure for ships and expeditions headed to Antarctica. A little over a decade ago the cities population was less than 10,000 while today it is approaching 100,000. This is partly due to the growing popularity of Antarctic tourism but equally because the Argentinian government has encouraged manufacturing with special tax breaks as well as subsidies for people living here.

The Beagle Channel is the most southern natural channel connecting the Atlantic with the Pacific and has been a popular shipping lane in the past. Split by the Beagle Channel is Tierra del Fuego which means land of fire. Because the area was often shrouded in fog early explorers called it the land of smoke which was exaggerated in Europe for advertising purposes into land of fire. A large part of Tierra del Fuego is an Argentine national park.

Where Your Ship Dock

Ushuaia has a large pier right at the cities waterfront capable of handling most ships. It is usually busy in season with expedition boats getting ready for Antarctic tours along with large cruise ships rounding the Horn or setting out for Antarctic waters. Right at the end of the pier is the cities visitor center with facilities and information on tours and the city. Also along the waterfront are a number of tour booking offices.

Disembarking – This port has a developed cruise ship pier but the ease of disembarking varies by the individual ships gangway designs. For passengers using wheelchairs there can be a moderate ramp incline to deal with.

Port City Characteristics – This port has average wheelchair infrastructure typical of moderate sized cities. The port area has modest inclines in sidewalks. Intersection crosswalks may have curbs or other wheelchair obstacles.

While the city has a population of almost 100,000 it is geographically compact with most restaurants, cafes and shops located within a ten by six block area. The Pan-American Highway passes right through the city the area is really isolated with no other towns or cities within hundreds of miles. The areas big attractions for visitors is the Tierra del Fuego National Park and the incredible animal life on islands in the Beagle Channel. Both are best visited on a guided tour or boat tour.

At this writing the exchange rate is about 38 Argentine Pesos to one US Dollar. Because of inflation rates over the past several years buying Pesos before leaving the United States is almost impossible. In the city many shops will accept Euros and American Dollars but it is advisable to exchange some currency for convenience. Credit cards are welcome and it is recommended to keep the charges in local currency to avoid unusual charges.

Parque Nacional Tierra del Fuego (Tierra del Fuego National Park) is probably one of the major attractions in the area. It is also the terminus of the Pan-American Highway that ends in a narrow dirt road inside the park. There are also a number of islands near the city in the Beagle Channel that are popular with penguins, seals, sea lions, cormorants along with whales depending on the season. There are a number of tour boats along the waterfront that you can book.

In town there are a number of excellent restaurants, cafes, and chocolate shops along with interesting gift shops. Terra del Fuego and Antarctic T-shirts are very popular. The city also can boast that they are home to the most Southern Hard Rock Cafe in the world. 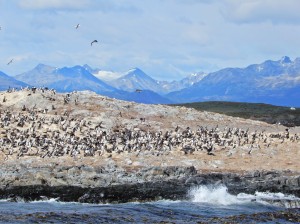