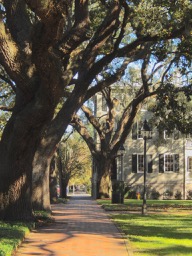 If Charleston is a Southern Belle than Savannah is the South’s Grande Dame. The city is built close upon the deltas of the Wilmington and Savannah Rivers at the confluence of the Savannah River and Little Back River. Traditionally, the culture of Savannah is rooted in the coastal “low country” just like its’ sister city of Charleston a hundred miles to the north.

The city of Savannah, Georgia was laid out by James Oglethorpe in 1733 around four open squares. Each square was surrounded by four residential (“tything”) blocks and four civic (“trust”) blocks. Once the four wards were developed in the mid-1730s, two additional wards were laid out and the city grew out from this plan. Almost three hundred years later it is those squares (http://www.savannah.com/savannahs-historic-squares/) that make Savannah so unique and attractive.

James Oglethorpe was a British soldier, Member of Parliament, and philanthropist, as well as the founder of the colony of Georgia. As a social reformer, he hoped to resettle Britain’s poor in the New World. Savannah was the beginning of his Georgia colony. The charter allocated each family a city plot to build a house on along with a larger garden plot outside the settlement proper and an additional large farm plot farther out into the countryside. The inner city design was originally intended to allow for defense from the Spanish to the south and the native tribes around the area.

Today it doesn’t matter if the plan was a result of genius or luck or centuries of dedication, Savannah is one of the world’s most beautiful, walkable and livable cities. It is home to SCAD (Savannah College of Art and Design) which is a dominant force in the culture of the city. Be sure to make time to visit their gallery and museum and ShopSCAD .

Savannah is also one of America’s most historic cities having played major roles in the colonization of America, the Revolutionary War and the Civil War. It is also known for food, ghosts (there are dozens of haunting legends as well as tours) and a vibrant lifestyle. When people think of this city they usually think of Midnight in the Garden of Good and Evil, the birdgirl statue, cemeteries and grand steepled churches.

The last time we visited Savannah was a year ago in August, during the heat of summer. We came back in November and the weather and temperatures were glorious. We spent most of our time touring on foot, taking time for frequent stops to shop and snack. While walking along the river late one afternoon we decided, for old times sake, to stop into The Charte House for happy hour. In addition to good happy hour drink prices and snacks we were pleasantly surprised with an order of fried green tomatoes, some of the best we have ever had.

While strolling around the outskirts of the historic district we stopped for lunch at Crystal Beer Parlor, a local treasure on West Jones Street. Located in a former grocery store the “Crystal” is Savannah’s oldest restaurant, dating back to 1933. Its’ menu features solid American fare and an extensive beer list including a nice selection of local brews.

On a previous visit to Savannah we took a walking “Famous & Secret East Side Food Tour” which was the most fun we’d had for lunch in a long time. We started at Smith Brothers Butcher Shop  and visited a half dozen spots for everything from tea and sweets to gyros. One of the stops was at Angel’s Barbeque, which had garnered a reputation for some of the best barbecue and homemade sauces in Savannah. We enjoyed delicious pulled pork sandwiches. I’m glad we stopped at that time as the owners, Andrew and Alieen Trice, have now sold the building and retired. To some this amounts to a tragedy.

If you are spending a day doing a walking tour of the city, a popular lunch idea is to stop by Smith Brothers Butcher Shop and order a sandwich to-go or pick up some items for a picnic in one of Savannah’s many squares. 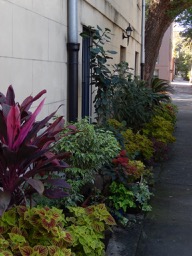 For an introduction to the flavors of the city one should consider a number of dishes that the city is known for like low country boil, Shrimp and grits, Crab Savannah, oyster roast, crab cakes, beans n rice or red beans, fried green tomatoes and for dessert look for Georgia Peach Pie or cobbler, pecan pie and pralines or gophers.

Some must have treats in this historic city are legendary Leopold’s Ice Cream , Savannah’s Candy Kitchen for pralines or gophers, Southbound Brewing Company  for a tour and samples and one of Savannah’s popular and eclectic coffee shops.