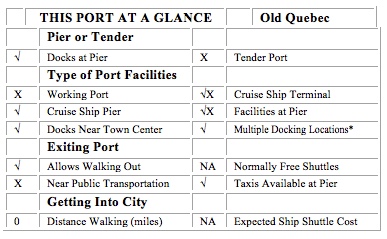 Old Quebec City is on a number of fall cruise itineraries. Starting in New York or Boston these cruises visit a number of New England and Canadian Maritime ports, go up the St. Lawrence Seaway, usually with fall leaves in full glory, and spend a day or two in Quebec City. The old city is full of historic sites, art galleries, good restaurants and beautiful scenery.

Where the Ships Dock – There is a modern cruise ship terminal on the riverfront along with a good length of docking space right in front of the Old Quebec neighborhood.

Transportation – Since Old Quebec is not that large an area and cruise ships will usually dock right in town, walking is the usual way to see the sights. The town does have a geography that rises steeply from the river so be prepared for a little climb. The city does have an alternative to the steepest climb though. The Old Quebec Funicular is a funicular railway in Old Quebec. It links the Haute-Ville to the Basse-Ville, climbing at a 45-degree angle, it covers a total distance of 64 meters.

Taxis – There are a number of taxi companies and generally they do not cruise for fares. They usually are available at the cruise ships or you call and they will send a car: 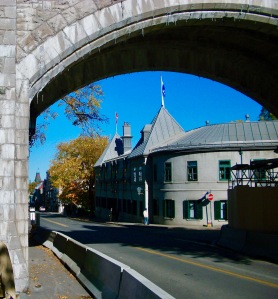 Uber – As of this writing you can make use of Uber from the cell phone app.

Rentals Cars – Readily available and a practical way to visit areas farther out from downtown.

Ferry – The ferry links Québec City and Lévis and runs 7 days a week, 365 days a year. It sails on the hour and half-hour during the day and every hour at night. 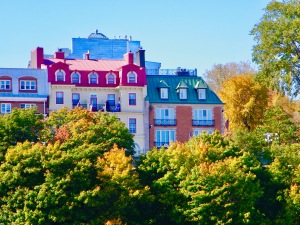 Money – Quebec uses the Canadian Dollar currently worth about 76¢ U.S. Also, do not count being able to use U.S. Dollars but credit cards are welcome.