While we are just not “guided tour” enthusiasts, we have been on a fair number of them. To begin with, there are some land tours that make good sense to do. The first is where there is someplace you really want to see and even the bus trip is on a very tight schedule. The one thing you can be sure of is, if you are on a ship sponsored tour the ship isn’t going to sail without you. And yes, we have seen people left behind. We have taken a number of tours also because the costs were just too good to ignore. Sometimes that is because we have onboard credits that we just need to spend and others have been provided by our agency as a perk.

From our point of view the biggest problem we have with guided tours is that you become a prisoner of the tour. It is common for us to get stuck visiting some place that we are just not interested in. Why do we have to spend forty-five minutes at a chocolate factory or a nut packer? I’m sure the tour operator is being paid to deliver people to that business but we resent paying for visit. The other case is visiting a location where we could spend hours and are informed we have to be back on the bus in a half hour. Going it on our own eliminates those possibilities.

There is also the issue of cost. If you understand your options, often you will see that the ships tour will cost you significantly more money. A few examples:

Cozumel Chankanaab National Park – When you get down to it, this is a day at the beach. The park is equipped with bars, restaurant, along with beach

and snorkel rental stuff. A taxi ride will cost between US$10 and US$20 each way (make sure you have plenty of singles as drivers don’t offer change) and park admission is about US$21. A recent tour booked through the cruise ship cost $69 per person. That’s $138 for what would have cost $62 on your own.

Mendenhall Glacier Alaska – This is a national park outside of Juneau Alaska. The park is serviced by a bus route from the historic downtown area with round-trip fare being $31. Add to that the admission to the park (NPS standard fees) $20 which totals $51 ($31 if you have a NPS Senior Park Pass). The basic cruise tours usually start around $75. They often will add in a salmon bake for $20 to $30 more. For more on Mendenhall CLICK HERE.

Rome from the Port of Civitavecchia – On

or first cruise stop in Civitavecchia we booked the “Rome On Your Own” tour at $89 each which included a bus ride in to Vatican City and back to the ship. Six blocks from the Civitavecchia port is the train station and for as little as US$12 you can get a round-trip ticket to the St. Peters station. For two that’s a savings of $154 and the trip in and back can actually be quicker.

For more on visiting Rome from Civitavecchia CLICK HERE.

In order to head off on your own and save some cash you do have to be a bit adventurous. We are pretty independent and prefer to use local buses and trains with our biggest fear being missing the ships departure. Our protection is to always build in a good time allowance in our plan. We are also good at doing research on our destinations and have a good idea of what we want to see and how to do it before we leave on a trip.

On the other side of the discussion here are a few examples of ship tours that we thought were well worth the cost and why:

The Golden Triangle Iceland – This tour was a bit pricy but so were the local tour companies. The reason we selected this tour is because our ship docked in the afternoon and sailed shortly after noon the next day disqualifying local tours. We also considered renting a car but again were concerned about the times. The tour itself was great. We probably traveled over a hundred miles and saw thermal fields, waterfalls(!!) and Icelands rift valley where the earths crust is pulling apart. No shopping stops or misspent time. If you are going to Iceland don’t miss the Golden Triangle. 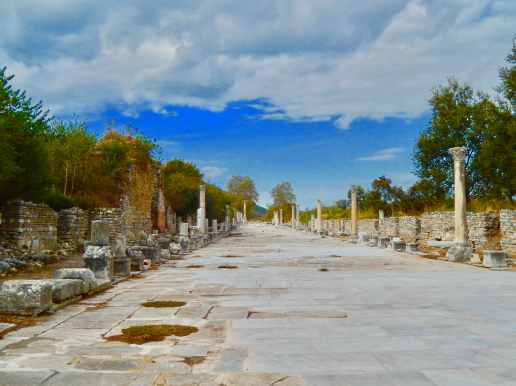 Ephesus Turkey – The ancient city of Ephesus, located near the Aegean Sea in modern day Turkey, was one of the great cities of the Greeks and later the Romans in Asia Minor and home to the Temple of Artemis, one of the Seven Wonders of the Ancient World. Today, the ruins of Ephesus are a major attraction located some distance from the port. Again not inexpensive but a great experience (it did include a stop at a rug showroom). We might be adventurous but there was no way I was going to rent a car for half a day in Turkey and I still am not aware of any convenient public transportation.

A Wine & Tapas Tour in Palma – This one wasn’t that expensive and included nice stops at three different tapas bars and free time in a nice in-town shopping area. The drive back to the pier included brief stops at the castle overlook above town and a drive along the coast. A good answer to filling an afternoon in Mallorca.  For more information CLICK HERE.

This is part one of a three part series we’ve been working on. Check back or subscribe to see the whole series.