Most people, when they talk about Singapore, speak in superlatives but, the simple truth is, mere words just aren’t enough. We flew to Singapore on United 1 from San Francisco, a seventeen plus hour flight

and had booked a room at the Grand Mercure Singapore Roxy in the heart of the historic Katong District.

The hotel is halfway between the airport and the Marina Bay District and offered a free airport shuttle. The facility is

modern, the rooms are comfortable and the staff is friendly and helpful. A great buffet breakfast is offered and, depending on the category of stay, may be included in the rate. The location is near shopping malls (Parkway Parade Shopping Center is across the street) and restaurants and just a few blocks from East Coast Park.

After walking to the park, you are amazed by the view out to sea. It looks as if half the ships in the world are either anchored

just off shore or are cruising by. Looking at a map you will notice that the South China Sea is blocked to the east by the Southeast Asia peninsula. The first opportunity that eastbound shipping has sailing from China, Hong Kong, Taiwan, Vietnam and all the other nations of the area is past Singapore and thru the Straights of Malacca (also sp. Melaka). That’s a lot of cargo bound for Europe, Africa, the Middle East and India all moving right past Singapore. That may also help explain why this city-state has become so rich and important.

The stories about the strict laws and their enforcement are mostly true. It seems that even chewing gum in Singapore is against the law because the government thinks it messes up the 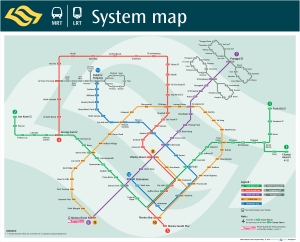 streets. When you arrive in country, your immigration form explains that selling drugs is punishable by death. While civil libertarians may be shocked, the obvious result is one of the most modern, safe and clean cities we have ever visited.

English is an official language taught in all schools along with

Malay, Mandarin and Tamil but almost all signage is in English making it easy to get around and find things. The city boasts a world class rapid transit system, the MRT that is easy to access, purchase tickets for and understand. The system offers an all-day ticket but we found it cheaper to purchase roundtrip fares to specific destinations. The cleanliness is also striking. No graffiti anywhere and you could probably eat off the floors.

Singapore boasts dozens of world famous restaurants and clubs, a Universal Studios theme park, one of the world’s great zoos, a water park, aquarium and two botanical gardens, the 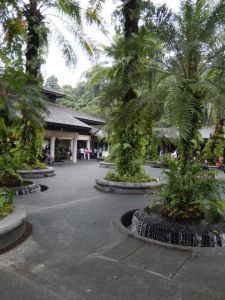 newest and most spectacular being Gardens by the Bay. Almost everything can be reached via the MRT or an inexpensive taxi ride. The city also boasts a Chinatown and a Little India which offer inexpensive shopping and eating options.

post in the early nineteenth century. The oldest, Sri Mariamman Temple dates back to 1827. The Sri Senpaga Vinayagar Temple is located on Ceylon Road, a few blocks from the Grand Mercure Roxy. It was built by the Sri Lankan Tamils for the Hindu God Ganesha.

While not a destination for bargain hunters because of the high cost of living, the city is home to a number of malls and department stores along with high-end specialty shops. Singapore shows off with a modern skyline and one of the newer additions is the triple towers of the Marina Bay Sands. This complex features a hotel, a casino

and 170 plus premium brand stores capped by a connecting roof garden floating at the top. It is home to a number of restaurants operated by the likes of Wolfgang Puck, David Myers and Gordon Ramsay.