If your future plans include more then an occasional cruise, you might want to consider focusing your bookings on a particular cruise line because of the loyalty programs they offer. Benefits can include discounts on or even free internet, laundry, photos, cocktail parties and fancy coffees. Some lines also offer cabin upgrades and priority treatment with boarding and tender usage.

Picking Your Cruise Line – There are a lot of similarities between the major cruise lines but there are also differences that make some more suitable to your particular needs. They all feature good dining options from main dining room dinners to buffets to specialty restaurants and good entertainment and shows, but the things that set them apart is often related to the passengers they try and attract.

Most lines cater to families but a few are stand outs because of their children’s programs. Two of the best are Disney and Royal Caribbean. There is also the price range that varies from one cruise company to another. At the economy end of the price range are Carnival and Norwegian. Stepping up a bit in price are Royal Caribbean, MSC, and Princess followed by Holland America and Celebrity, which are a bit

higher still. At the other end of pricing you will find Cunard, Disney and Oceania with Silver Seas and Seabourn being the ultra exclusive lines.

Besides simply price, there are a number of other things to consider when picking a line. Following are some observations we have made regarding a couple of cruise lines:

Carnival – Besides being the price leader, we have found Carnival to be a favorite with young adults. Especially in the Caribbean, these ships have a non-stop party atmosphere. We have not cruised with Carnival outside of the Caribbean so other itineraries may be less that way. The food and service have generally been good and the cabins a bit roomier then many.

Royal Caribbean – Good value in a cruise line and really focused on families. It has one of the best kids’ programs at sea with great entertainment options. Many of the ships have basketball courts and climbing walls and a couple have ice skating rinks and Flo-Rider surfing. Some of their newest ships have simulated sky diving and an amusement park style area.

Celebrity – Features a step up in service and appeals to a

more mature cruiser. We like this line because of the enrichment programs, which include lectures and classes. Celebrity also offers a number of longer itineraries and more exotic destinations than some of the other lines.

MSC Cruises – Has been trying to “break into” the U.S. Caribbean market with true two-for-one pricing and has also offered to match your frequent cruising status from another cruise line. We have not, as yet, cruised with them.

Disney – The name alone says kids & family and you won’t be disappointed. From movie themed areas to Disney

characters the whole ship is a Disney experience. One feature that really appeals is an evening dinner rotation that moves your group to a different style restaurant each night and your table staff goes with you. Oddly Disney is also really good at providing adult only areas that are more strictly enforced than other lines.

Plans and Perks – If you plan on cruising on a regular basis, even as infrequently as once every year or two, you should still join a cruise line loyalty program. Royal Caribbean’s is The Crown & Anchor Society and it’s free to join. If you don’t join you won’t earn the points. In their case, once you reach Diamond status you get a dedicated lounge on board with specialty coffee, some free internet, a free photograph, a special gift and a free cocktail party each evening. Priority boarding and other perks are also offered.

Carnival Cruise Line has their VIFP Club with members-only promotions, invites to cocktail receptions while you sail, priority boarding & more. Like most programs, the more you cruise the more you get.

Celebrity has the Captain’s Club  and when you reach Elite status you get access to the Captain’s Club Lounge for daily coffee house style breakfast and evening Cocktail hour. Other features are complimentary 90-minute Internet package, some complimentary dry cleaning and laundry on every sailing, a private shipboard departure lounge serving continental breakfast, priority tender service in tender ports of call and more… 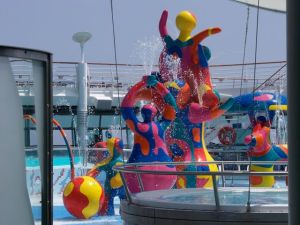 If you’re going to cruise anyway, you would be wise to commit your loyalty and begin accumulating some perks.

One additional note, Celebrity is part of the Royal Caribbean family along with Azamara and frequent cruise status can be extended in a one-time transfer between these cruise lines.