After spending a week on an organized land tour in early June (Yellowstone, Grand Tetons, etc.), we picked up a rental car in Salt Lake City. With accommodations booked in Moab, Panguitch, Springdale and Los Vegas, Nevada we headed out taking US15 south from Salt Lake City and then picked up Route 6 toward Moab.

On our way we took a side trip to Nine Mile Canyon (additional information). We had been told about the canyon and had also read an article about the locations of petroglyph sites in the area. The canyon is actually forty-eight miles long with the first petroglyph site about twenty-seven miles in. Unfortunately we seemed to have misplaced the article, which listed the location of each site and, once into this isolated area, we realized what a mistake that was. The two-lane road had virtually no traffic (except some free roaming cattle) and there was very little in the way of signage. We passed the first marker twice without seeing it – a green sign on a post about six

inches tall and ten inches long that simply said “First Site” and an arrow. If you have the time, a visit to a few of these thousand year old sites is really interesting.

Getting into Moab late in the afternoon we checked into the motel and got something to eat with a plan to start in Arches National Park early the next morning. 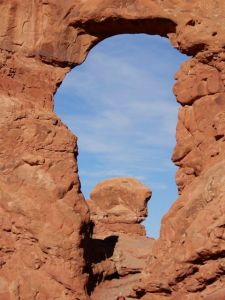 We visited Arches National Park early in the morning and realized that no photograph or description can begin to express the massive size of its’ formations or the scale of the arches and balancing rock structures. This place just has to be experienced in person. The sandstone formations are massive and the colors are fantastic. If you are a hiker, there is a large number of very walkable trails in the park, temperature permitting, along with a number of scenic drives. On the subject of weather it is very important that you carry water in your car and with you if hiking. The high temperatures and dry conditions can be punishing.

Only about twenty-five miles from Arches is the northern entrance to Canyonlands National Park and it is a wholly different experience as you enter on high bluffs and look down into the canyons. The landscape is similar to the Grand Canyon in character and color as you stand on the rim. In the western area of the park are the best hiking trails where an extinct volcano caldera formed an interesting bowl-like valley. Between Canyonlands and Arches is a state park named Dead Horse Canyon which is worth a visit as well. There is also an entrance to Canyonlands about sixty miles south of Moab that features the Needles District with a strikingly different look, featuring backbone formations of rows of sandstone spires. 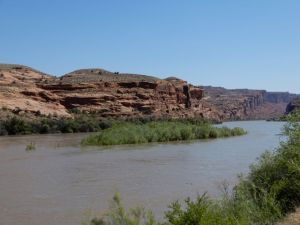 Just south of Arches National Park is scenic Route 128 North that runs up another canyon beside the Colorado River. As you drive the road along the river, you are surrounded by 500 to 1,000 foot sandstone cliffs with many completely vertical. On the river you see numerous rafting groups and as you drive deeper into the canyon the land

opens up to dozens of spires and buttes.

In the canyon is a small town named Castle Valley and near the river is the Red Cliffs Lodge and the Castle Creek Winery. The winery offers tastings and features some good wines that are popular in the region’s restaurants. On the map you may notice a ghost town named Cisco and might be tempted to go take a look. Do not bother – the town is a junkyard of abandoned trailer homes and RV’s laced with obscene graffiti. Our suggestion is when you reach Dewey Bridge,

turn around and drive back unless you are going on to US 70. While we didn’t visit, we were told that there is an interesting movie museum near the Castle Creek Winery and there are numerous raft operators on this stretch of the Colorado River.

Leaving Moab the next morning we headed north on 191 to US70 west. We exited 70 onto Route 24 south and headed to Capital Reef National Park. Capital Reef is home to another collection of petroglyphs and these are well marked with easy access from the road. This is also the location of Fruita which was established by Mormons as an agricultural area in 1880. A few structures from the original settlement still remain as do the orchards.

Route 24 travels right thru Capital Reef with one scenic side road inside the park featuring a number of good hiking trails. After exiting Capital Reef on 24 west we picked up Route 12 heading south towards Bryce Canyon National Park.

Utah Route 12 is a scenic and interesting trip from Capital Reef to Bryce Canyon. It crosses some spectacular country with ridges, canyons and mountains at every turn. One stretch navigated a ridge with only two narrow lanes and steep drops on both sides. Along the way we stopped at the Anasazi State Park where we viewed a interesting museum and Indian village excavations.

Bryce Canyon is a must visit. The park sits atop high country,

looking down into the canyons which are packed with geological features called hoodoos. (Interconnected spires of colorful sandstone creating mazes and rising from the canyon floor.) While hoodoos are scattered throughout the parks in Utah, nowhere in the world are they as abundant as in the northern section of Bryce Canyon. Many of the hiking trails go down the canyon face and are steep and descend an average of 700 feet but there are a few walkways for those seeking less of a challenge.

There is a hotel with a restaurant inside the park but there are also a number of accommodations just a short drive away starting at Bryce Canyon City. The Park Service, in an effort to reduce traffic, operates free busses with pick-up stops in the “City”. The drive through the park is about nineteen miles to the end at Rainbow Point with an altitude of over nine-thousand feet. At the point, the morning we were there, the temperature dropped over twenty degrees from the Visitors Center and winds were howling.

Red Canyon is between Bryce Canyon and Panguitch where our motel was located. The canyon road goes thru two short tunnels cut thru the sandstone and there are a couple of parking areas for the hiking trails. Our motel had a colony of prairie dogs right outside our door and they liked to come out and socialize around dusk. The second night we were visited by a pronghorn antelope. One cautionary note here is that Panguitch is mostly closed on Sundays and it became a challenge finding a place to eat.

After two nights near Bryce Canyon in Panguitch we headed off early for Zion. We had read that Zion has a traffic problem and that by late morning parking is almost impossible to find. Like Bryce Canyon, Zion also has a free shuttle bus that picks up at stops in Springdale, the town just outside the southern entrance to the park. In season Zion Canyon Scenic Drive is only open to the parks buses, which can be picked up at the Visitors Center near the south entrance. Of the parks we visited, Zion had the largest number of hiking trails ranging from

wheel chair accessible to strenuous. One of the park’s more popular hikes goes thru “the narrows” which is a narrow width passage with a stream running through it . Unfortunately this trail and a few others require a permit and there is usually a several days wait to get one.

Driving down from Panguitch we entered Zion around 9:00 am at the east entrance. There were maybe three or four cars ahead of us and we traveled down canyon walls thru numerous switchbacks and two tunnels. One tunnel was two lanes and almost a mile long with no lights, so be sure and test 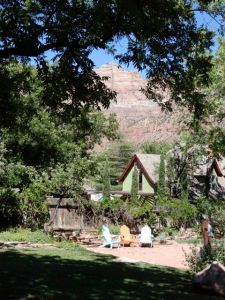 your headlights before entering. We got to the visitors center around 10:00 and had to search for parking. We took a couple of hikes on trails near the Visitors’ Center and by noon the line for the tour busses wound thru the complex and out into the parking lot. A few hours later when we exited to Springdale the line of cars to get in was backed up over a mile through town. 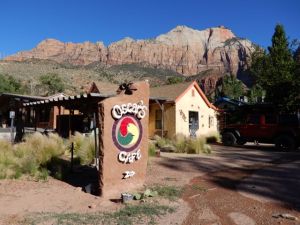 We spent the night at The Red Rock Inn and it was the highlight of the trip. Located in town and a couple of miles from the park it was comfortable, beautifully decorated and clean. The owners were helpful and friendly and the room came with a voucher for breakfast at Oscars a block away. Oscars was also great, offering a full breakfast and plenty of coffee. The whole town is nestled in a canyon with towering red sandstone cliffs above it and unbelievable traffic “in season.”

The next morning we headed for Los Vegas with a couple of nights on the strip and our flight home. During the trip we saw snow (Panguitch averages six inches in June), windy conditions and virtually no rain. In summary, it was the trip of a lifetime offering spectacular scenery and temperatures ranging from freezing to over one hundred.  BACK TO TOP