We just left St. Croix having not been there in over fifteen years. We scheduled this trip last summer, long before hurricane Maria made a visit. Our original plan was to visit some old haunts and see who was around. Unfortunately this trip became more a series of comparisons between hurricanes Hugo and the recent Maria.

First let me say that we really love St. Croix. In fact in 1989 we were beginning plans to move there but in September Hugo ripped thru. At the time we had an office in Gallows Bay and after Hugo it was six weeks before we heard from anyone there. Even then the only working telephones on St. Croix were at the Buccaneer Resort because they had their own generators and satellite link.

On this recent trip we had a number of discussions with Cruzans regarding which storm they thought was worse. Generally people that were adults at the time of Hugo and continued to live on the island thought Hugo was a more destructive storm. Younger people were emphatic that Maria was worse. It looked like there was some “my storm was bigger than yours” thinking.

Major hurricanes are nothing new to the Caribbean and while some people will use disasters like Maria to push a case concerning climate change there is a long history that tells a very different story. If you examine what we know about hurricane history you realize that, with the exception of a volcano or two and an occasional earthquake, hurricanes are the most destructive force in the region and simply a fact of life in the Caribbean.

In August 1772 a hurricane swept across St. Croix devastating the island.

I take up my pen just to give you an imperfect account of the most dreadful hurricane that memory or any records whatever can trace, which happened here on the 31st ultimo at night. 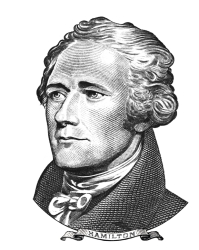 It began about dusk, at North, and raged very violently till ten o’clock. Then ensued a sudden and unexpected interval, which lasted about an hour. Meanwhile the wind was shifting round to the South West point, from whence it returned with redoubled fury and continued so till near three o’clock in the morning. Good God! what horror and destruction—it’s impossible for me to describe—or you to form any idea of it. It seemed as if a total dissolution of nature was taking place. The roaring of the sea and wind—fiery meteors flying about in the air—the prodigious glare of almost perpetual lightning—the crash of the falling houses—and the ear-piercing shrieks of the distressed, were sufficient to strike astonishment into Angels. A great part of the buildings throughout the Island are levelled to the ground—almost all the rest very much shattered—several persons killed and numbers utterly ruined—whole families running about the streets unknowing where to find a place of shelter—the sick exposed to the keenness of water and air—without a bed to lie upon—or a dry covering to their bodies—our harbour is entirely bare. In a word, misery in all its most hideous shapes spread over the whole face of the country.— A strong smell of gunpowder added somewhat to the terrors of the night; and it was observed that the rain was surprisingly salt. Indeed, the water is so brackish and full of sulphur that there is hardly any drinking it…

I am afraid, sir, you will think this description more the effort of imagination, than a true picture of realities. But I can affirm with the greatest truth, that there is not a single circumstance touched upon which I have not absolutely been an eye-witness to.

It was also probably the reason Hamilton relocated to the continent.

Eight years later in October 1780 another storm literally leveled Barbados and devastated three other islands with a loss of life above 20,000. Both those storms were estimated to be category five.

Literally hundreds of these storms have ravaged the Caribbean over the years. in 1819 Hurricane “San Mateo” was a major hurricane. It moved over the Virgin Islands causing 101 deaths then over Puerto Rico the night of September 21st. The storm sank a lot of ships in San Juan and it is estimated that this storm destroyed most of the houses and crops in most of Puerto Rico.

1825, July; Hurricane “Santa Ana” is one of the strongest hurricanes on record in Puerto Rico. Caused 374 deaths and 1,200 injured.

“San Ciriaco” hurricane in 1899 is the longest lived storm on record in the Atlantic. It produced major damage in Martinique, St. Kitts, and killed 3,369 people in Puerto Rico. It went on to produce serious damage in the Dominican Republic, and continued thru the Bahamas.

The good news is that each year the people of the islands continue to improve the quality of their structures, add more and more shelters and are also taking steps to bury vital utilities. While people bemoan these storm’s devastation, the truth shows the death rate from these disasters continuing to decline all over the Caribbean. Property damage may be on the rise mainly because there is more and more building going on.

On our recent visit to St. Croix we saw a lot of damage to buildings, uprooted trees, roads strewn with power lines and broken utility poles but also, after four months a great deal of improvement has also been reported. On the lesser populated east end of the island the power crews were still restringing electric lines. There they were still going up on poles but that is because there just aren’t enough properties to justify the expense of going underground. Elsewhere on the island a lot of utilities and major power lines have gone underground.

After Hugo in Christiansted there was major damage to structures. Most of the boardwalk along the water was seriously damaged or swept away. Boats were swept up into the towns streets and buildings showed a lot of roof damage. After Maria, while there was damage to roofs and some buildings, the boardwalk remained in pretty good shape even though some of the docks suffered. Most of the old decking wood had been replaced with new composite materials some years ago and seemed to fare much better. It also remains impressive how some structures, several hundred years old seem to survive completely intact storm after storm.

After these major disasters, people start talking about how will they ever put things back and will the island ever be the same again? After Hugo a popular T-shirt on St. Croix was a quote from Nietzsche “That which does not destroy us, makes us stronger”.

After having had experience with major hurricanes and the recovery afterwards on St. Croix, St. Thomas, Antigua, St Maarten, Jamaica and Grand Cayman it is obvious to us that these islands will always come back, very often better than before. Besides being home to many people, these islands are just too beautiful not to be visited and there is just too much money to be made welcoming tourists back to this paradise of sun, sand and turquoise waters.

Our recommendation is that if you are thinking about a Caribbean vacation keep making plans. The impacted islands will be back in business sooner than you think and they could certainly use the business.

Please Note: All pictures in this post, except the Hugo damage, were taken on the Jan. 2018 visit. Many of the hotels were not taking guests, including The Hotel on the Cay, or are occupied by FEMA or power linesmen working on the island.

One thought on “St. Croix -The Cost of Paradise”