Amsterdam, Heart of The Netherlands

Approaching The Netherlands from the North Sea cruise ships navigate the North Sea Canal. The canal runs from the IJmuiden locks to the Coenhaven. East of the Coenhaven, the waterway is called the River IJ (both letters are capitalized) and continues up to the Oranjesluizen locks located in the eastern part of Amsterdam. Than from the Oranjesluizen up to the Passenger Terminal in Amsterdam. Unfortunately ships that are transiting into Amsterdam often come in before dawn so as to be tied up early in the day. Passengers that are sailing out of Amsterdam late in the day get a much better appreciation of the systems that protect Holland from the North Sea.

Amsterdam is the largest city in the Netherlands famous for tulips, cheese, marijuana, red light districts and canals,. Many people call the country Holland but the true name is the Netherlands with Holland being the name of two of its states. The people are Dutch as is the name of their language.

The most important thing to know about Amsterdam is when walking in the city, pay attention and stay out of the bike lanes and watch out for bikes! Everyone rides bikes to get around in this city and in most areas there is a designated bike lane between the sidewalks and the street. The biggest mistake visitors make is seeing the traffic stop and step off the sidewalk without looking for bicycles. Keep you eyes open for bikes – a bicyclist moving at ten miles an hour can do a lot of damage to a pedestrian.

Your ship will dock at the Cruise Terminal on the river IJ. The cruise facilities are modern with good access to public facilities. From the terminal it is just a 10-minute walk to the central train station. With the cruise ship at your back walk off to your right along the waterfront to reach the station and central Amsterdam.

The cruise terminal is only a 20 minute ride from Amsterdam’s Schiphol Airport and just a ten minute walk to Amsterdam Central Train station. There is also frequent train service from the station to Schiphol Airport. Amsterdam has an excellent and inexpensive bus system

The city is laid out like a fan with major streets radiating out from the Amsterdam Central Train station. The major canals arc across the fan along with a number of city streets. Most major streets are serviced by trams which run every few minutes.

Traveling within Amsterdam by public transportion is easy to understand and very convenient. The network is operated by GVB throughout the central city and connects its neighborhoods with trains, trams, metro, bus and ferry. The least expensive and most convenient way to see the city is with GVB day passes. Available from 1 to 7 days, with prices starting from €8.50 per person, per day and valid on trams, buses and metros operated throughout Amsterdam. You can buy your tickets in advance from the GVB website HERE.

The Netherlands, like other members of the EU uses the euro as its official currency. You will often discover that to avoid the use of the 1 and 2 cent coins, many cash transactions are rounded to the nearest five cents in the Netherlands. Credit and debit cards a commonly accepted but U.S. Dollars need to be changed into Euros.

This is a beautiful city and great for walking (watch out for the bicycles!). Canals lined with boats are at every turn and like most major cities there are books dedicated to seeing this city. Museums, galleries, gardens and historic places are everywhere but often it’s just the cities neighborhoods that make a visit memorable.

Rijksmuseum – One of Amsterdam’s most popular attractions – and certainly its most important art repository – the Rijksmuseum was founded in 1809 to house the country’s huge collection of rare art and antiquities. 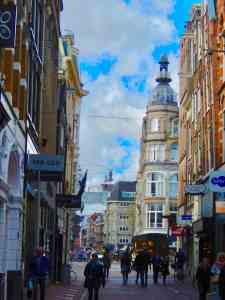 Van Gogh Museum – A must-visit for art fans and historians, the spectacular Van Gogh Museum has been one of Amsterdam’s top attractions since it opened in 1972.

Vondelpark – The largest and most visited park in Amsterdam, Vondelpark occupies 116 acres.

The Anne Frank House – On the Prinsengracht, the Anne Frank Museum is dedicated to the all-too-short life of one of the world’s best-known Holocaust victims.

If you are visiting in the Spring (usually from late March through early May) a must see is the Keukenhof Gardens, one of the worlds largest flower festivals featuring acres of tulips. Visit our article on the Keukenhof  HERE.