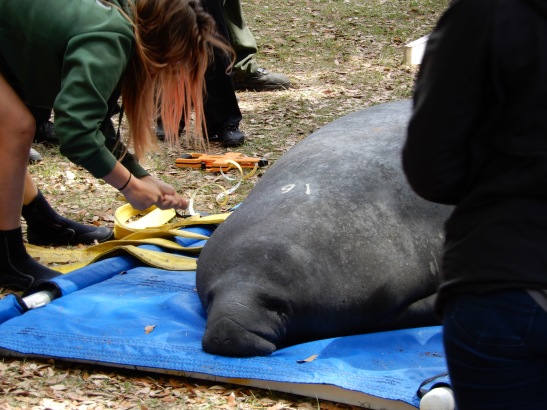 While on a short drive around Central Florida this week, we stopped at Blue Springs Park in Orange City for a hike. Without expecting it, we got there as several animal rescue groups were preparing to release a manatee back into the wild.

The release that morning was a female who had been rescued weighing under six hundred pounds. She had completely recovered and had gained about three hundred pounds in

rehabilitation. There were a number of organizations involved in the release including Sea World, The Jacksonville Zoo and the Florida Fish and Wildlife Commission. While we were there a group of volunteers lifted her with a stretcher and walked her into the waters from the spring. As she was placed in the water there were a number of other manatees swimming nearby including several babies.

Blue Spring is one of the major water sources feeding the headwaters of the St. John River and 102 million gallons of water flow out of Blue Spring into the river every day. The spring is a designated manatee refuge and the

winter home to a growing population of West Indian Manatees. The outflow from the spring measures 73° year round and is a popular spot for swimming, snorkeling and scuba diving. Contrary to a number of reports swimming or diving with the manatees is NOT permitted.

In 1856, the spring and surrounding land were purchased by Louis Thursby, a Gold Rush prospector turned orange grower. He built a large plantation-style home for his family on the property. It is located inside the park and is open to the public.

There are a number of good hiking trails inside the park and and additional activities include kayaking, fishing, camping, and wildlife watching. There are also cabins to rent and St. Johns River Cruises and Tours  operates boat tours from the park dock daily at 10:00 a.m. and 1:00 p.m. It is a two-hour narrated nature and ecological cruise on the beautiful and historic St. Johns River. For fees and reservations, you can call (407) 330-1612 or (386) 917-0724.

The following clip was not taken at Blue Springs.