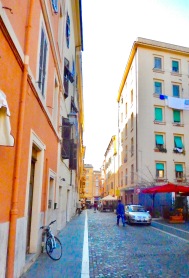 Rome. The city is served by frequent train service from Rome along with service to other Italian destinations. The Cruise port is only a short five or six block walk along the waterfront on Via Aurelia. Once at the port there are usually free shuttles to the cruise ships. How the shuttles run seems to change often. 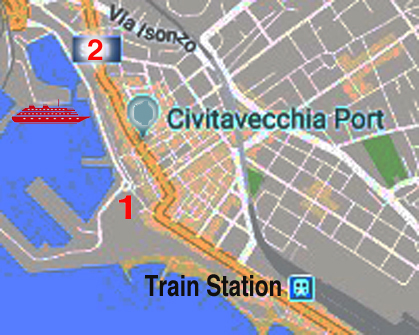 likely location to catch the shuttle is marked with a red 2.

Where the Ships Dock – Civitavecchia is both a cruise ship embarkation port as well as a popular port of call and for that reason it can have a large number of ships in port from time to time. On one day we counted seven cruise ships tied up. Because of the size of the port it usually requires a shuttle to get out of the port. 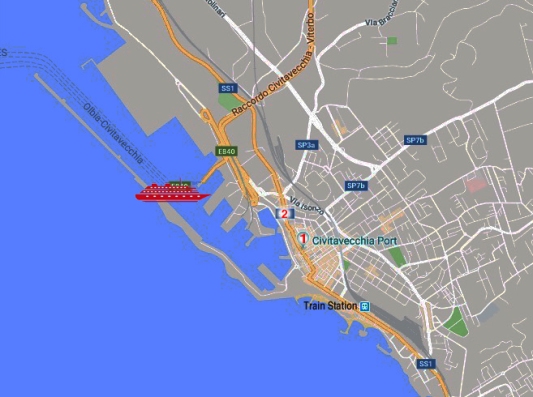 Transportation – The best way to get into Rome is to take a train. From Civitavecchia a typical trip to S. Pietro (40 mins), Trastevere (50 mins), Ostiense (55 mins) and finally Termini (70 mins). Fare starts at €5 one way but can cost up to €25 round trip depending on ticket class. There is a manned ticket booth at the station along with vending machines. 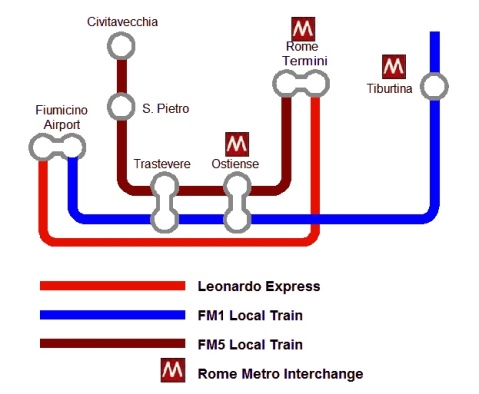 Taxis are available but are famous for overcharging with the short ride from the port to the train station quoted as high as €10 or €15.

Taking a taxi into Rome or to the airport can be an expensive trip with fares running from €150 to €300.

There are also shuttle services to the airport with an average price starting at €25 per person. It is recommended that reservations be made as schedules can vary a lot.